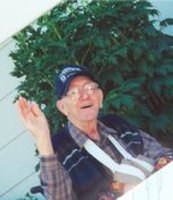 Peter Skavlebo of Parkland Terrace Nursing Home in Shellbrook, SK. spent his first day in heaven on August 25, 2007 after 87 years here on earth. Peter was born February 26, 1920 to Steen and Mary Skavlebo. He attended school at Bygland until grade 6 when he had to quit to help out on the farm. He moved out to Longe Lac, ON. to drive truck and then in 1947 he moved to Surrey, BC and worked at the Swift Meat Packing Plant for two years and then decided to move back to Saskatchewan or as he liked to call it "The Best Place In the Whole World". He rented Uncle Sam Kvinlaug's farm in the Hilldrop district. In 1957 he purchased the farm where he maintained a mixed farming operation with grain, cattle and pigs. On June 17, 1960 Pete gave up bachelorhood to marry Elvena Segberg and also gained five children, Elaine, Dennis, Lynda, Vivian and Terry. Later on his precious daughter Pauline was born. The Skavlebo house was always filled with lots of love and laughter. In 1991 Peter lost his loving wife. In 1996 Pete underwent major surgery and in October of that same year he decided to give up his lifelong passion of farming and had an auction sale. In June of 1998 he moved from the farm to Shellbrook. He enjoyed having dinner every Wednesday and Saturday with his new friends from Heritage Place. He also enjoyed the kids coming for soup and cookies at lunchtime and after school. Life changed drastically for Peter in 1999 when he suffered a severe stroke and was no longer able to maintain his independence. He lived in Parkland Terrace for eight years but was still able to go to many family functions and also outings with the staff. He was a member of Concordia Lutheran Church until it closed and then Parkside Immanuel Lutheran until his passing. He passed his love of Christianity down to his kids and grandchildren. No matter how late his kids were out on a Saturday night he made sure they were up for church on Sunday morning and then the afternoons were usually spent enjoying a huge dinner followed by company and singing around the old organ. His love of sports took him to almost every game the grandchildren played at home or away. He was the official lefse taster and every year would comment: "This is the best lefse I've ever had". The family have many memories that they will cherish. Peter leaves to mourn his passing; his children; Pauline (Keith) Mason of Shellbrook, SK., Elaine (Jim) Brunton of Maple Ridge, BC, Vivian (Murray) Taylor of Shellbrook, SK., Dennis (Johanna) Segberg of Lloydminster, SK., Terry (Arlette) Segberg of Shellbrook, SK., 13 grandchildren, 12 great grandchildren, brothers; Herman (Lois) Skavlebo of Shellbrook, SK., Ernest (Margaret) Skavlebo of Kelowna, BC., one son-in-law; Marvin Moberg of Shellbrook, SK., sisters-in-law; Irene Drangsholt of Big river, SK., Margaret Skavlebo of Prince George, BC., a brother-in-law, Eddy (Florence) Drangsholt of Lodgepole, AB., Walter Baun of Shell Lake, SK. and numerous nieces and nephews. Peter was predeceased by; his wife, Elvena, his parents, Steen and Mary Skavlebo, one daughter, Lynda Moberg, sisters; Hilma Michaelson, Selma Nielson, Margaret Schock, Evelyn Baun, a brother, Leonard, an infant brother and sister, Leonard and Pauline, brothers-in-law, Corneleus Schock, Walter Nielson. The Funeral Service was held on Thursday, August 30, 2007 in Immanuel Lutheran Church in Parkside, SK. at 2:00 p.m. with Pastor Chris Dean as officiant. The Eulogists were Larry Brunton and Teresa Sare. The Honorary Pallbearers were "All of Pete's family and friends". The Active Pallbearers were Gordon Mathers, Ray Nordin, Les Smith, Gordon Skavlebo, Jack Wilson, Stanley Skavlebo. The Pianist will be Bernice Labrash. Special music by the Ordale Singers and the Skavlebo Clan. In lieu of other tributes memorial donations may be made to Immanuel Lutheran Church in Parkside, SK. The interment was in North Concordia Cemetery.