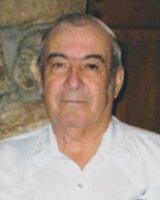 It is with sadness that the family of Charles “Charlie” Pocha announce his passing at the age of 85 years. He passed away peacefully early Monday morning at Mont St. Joseph’s Home.

Charlie will be lovingly remembered by his wife Opal of 63 years. He is also survived by his children, Lynn (Bruce), Dale (Trudy), Ray (Marina) and Richard (Patty); his grandchildren Curtis (Brianna), Sean (Nicole), Jessica, Carly (Scott), Ryan and Brennan; and his  great grandchildren Mims, Cassian and Bernadette.

He was predeceased by his parents (Philip and Bertha), his brothers (Edward, Robert, Martin, Louis, Leon, Michael and Laurent), his sisters (Agnes, Josephine and Alice) and his beloved granddaughter, Megan. He remained the only sibling since the death of Laurent in 2013.

Charlie was born in Prince Albert on April 16th, 1936, but was raised on the farm at Duck Lake. After his move to Prince Albert as a young man he worked different construction jobs. Eventually specializing as a cement finisher leading to owning his own cement business for 15 to 20 years. He then went to work for Henry Romeron (Permanent Construction) for many years. He finished his working career working for the city of Prince Albert on the cement crew. He enjoyed working with his hands cutting wood, helping his children with their homes and gardening. He loved watching baseball and hockey and was a long time Raider season ticket holder. Every year he would make an ice rink in the backyard where it was enjoyed by his kids and their friends. Intermittently through out the years he was the rink caretaker at Parkland Community Club and coached his son’s hockey teams for many years. He continued to sharpen skates at the Kinsmen arena well into his senior years. Throughout his life he continued to spend lots of time at the farm helping out Auntie Winnie, Uncle Leo and Uncle Robert.

We would like to thank Dr. Halyk for being Dad’s Dr for many years. The family would also like to thank Wayne Nogier and his compassionate staff at Mont St Joseph for taking care of Dad for the last 6 years. Special thanks to Tamara Olmstead (assistant director of care) for treating Dad with respect and dignity these last few weeks. The family would like to also thank Allison Nagy (director of care) for taking care of Dad all these years at the home. Although they are now retired Brian Martin and Joan Byrne for their kind words and guidance when Dad first moved to the home.

It is the family’s request that those wishing to place a memorial donation may do so to the Mont St Joseph Foundation - 777 28th Street East, Prince Albert, SK S6V 8C2.

Funeral Mass will be celebrated at 2:00 p.m. on Monday, December 27, 2021 at St. Michael Parish, 1505 13th Street West, Prince Albert, SK.  The service will be live streamed using the link https://youtu.be/YWyjiSC2-Kk and a recording will be available after the service at www.beaulacfuneralhome.com