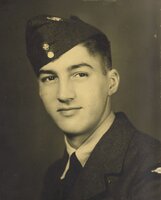 Gordon Louis Dumont passed away with his family by his side on Monday, October 3, 2022, in Prince Albert at the age of 88 years.  Dad was born on February 22, 1934, in Lloydminster, SK to Tobi and Eva Dumont (nee Lariviere).  He went to school in Lloydminster where he excelled at sports.  Dad joined the Canadian Armed Forces when he was 17 and made the military his career as an Airframe Technician.  Dad’s passion was sports, he was an avid Blue Jays fan.  He was also a “scrapper” with a fierce right hook.  He was a private and generous man, loyal to his family.  Gordon is survived by his sons, Gordon, George, and Gavin; his daughters, Cindy (Dan) Chapman and Donna Chikowski; as well as numerous grandchildren, great-grandchildren and great-great grandchildren.  He was predeceased by his wife, Louise; and his daughter, Adele “Del” Dumont.  A Private Family Interment will be held on Friday, October 7, 2022 at Prince Albert Memorial Gardens.  Family and friends wishing to send online condolences are welcome to visit www.beaulacfuneralhome.com.  Arrangements have been entrusted to the care of Beau “Lac” Funeral Home and Crematorium, Tracy-Lynn Lenchuk, Funeral Director, Prince Albert, SK 306-763-3322.