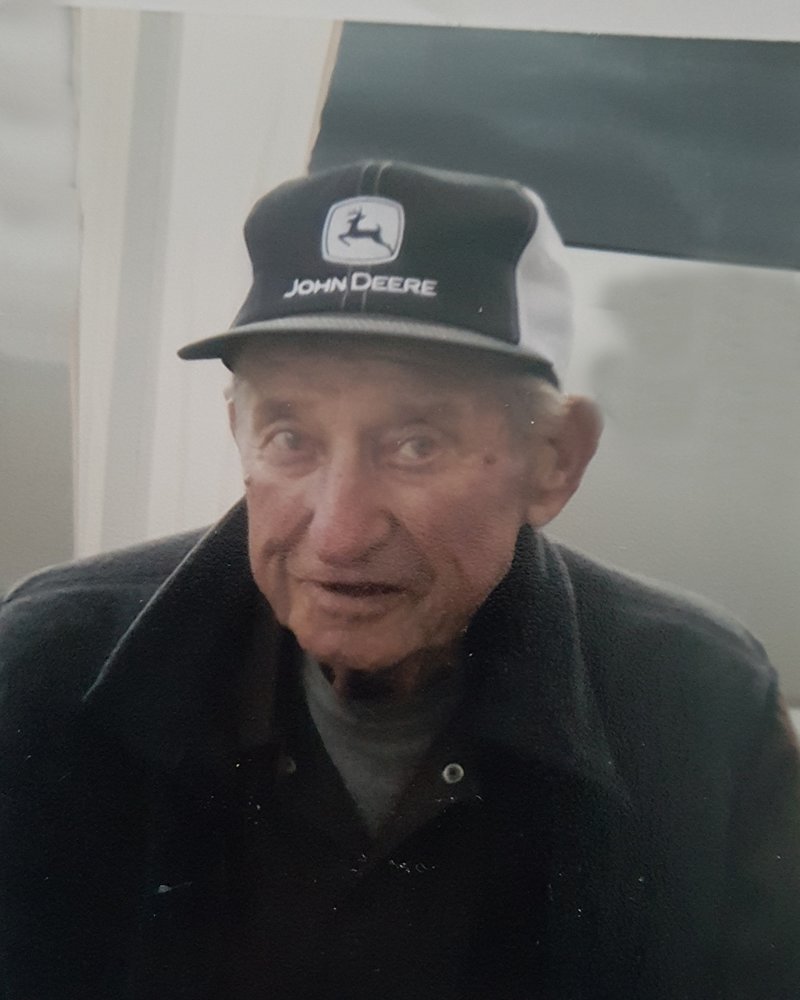 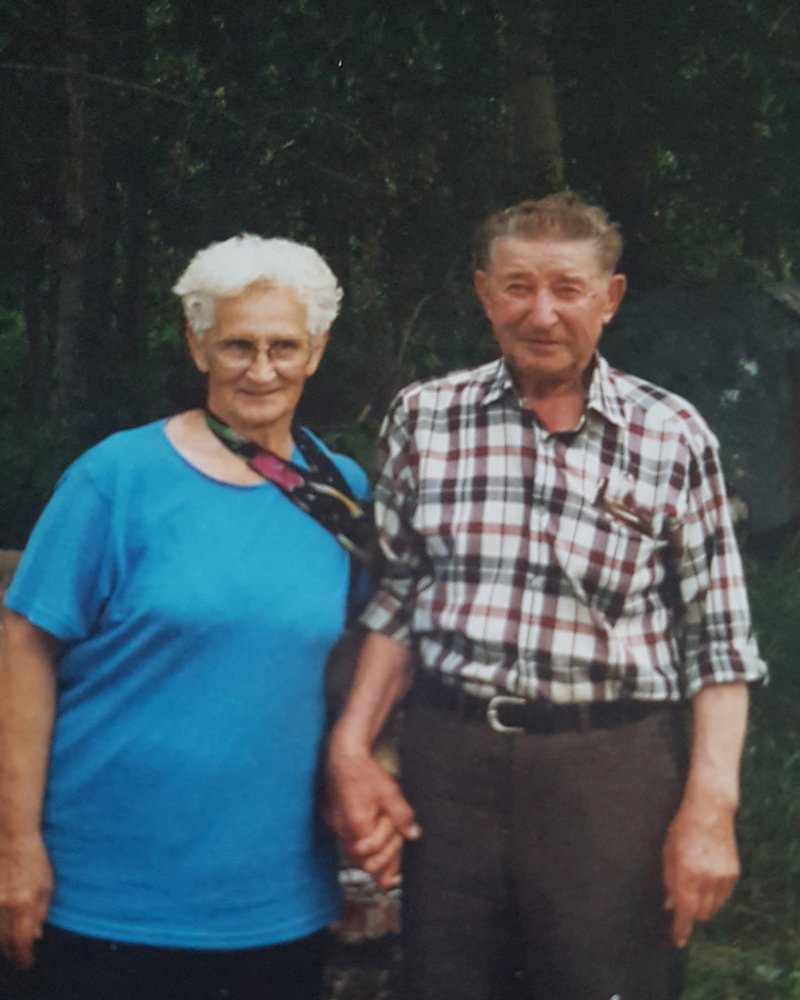 We are very saddened to announce the passing of Paul Kowalchuk on July 7, 2021, after a brief illness.  He joined his soulmate, Aline, to continue the next leg of his journey.

He was predeceased by his wife, Aline; his son, Gerald; his sisters, Mary Marko, Nettie Lune, and Alice Picklyk; his brothers, John, Nick, Adam, Bill, Henry, and a brother in infancy.

In lieu of other tributes, memorial donations in memory of Paul may be directed to Sts Peter and Paul Ukrainian Catholic Church in Tway, SK.

Eulogy as presented by Celeste Lemieux

Hello. My name is Celeste.  I’m Paulene’s step-daughter and the eldest grandchild. On behalf of the immediate family, I’d like to express our gratitude to all of you for being with us here today from near and far.  Today we mourn the passing and celebrate the life well lived of a good man.

Gidu was a man of many talents and skills.  He was born in Tway at home on September 13, 1924. He grew up in a different era, hunting and trapping with his brothers, picking wild strawberries on a Sunday, walking for miles and staying out all day hunting partridges (cooking some and taking some home for his mom to roast), having only a slice of bread and cheese wrapped in a handkerchief if they had no luck, walking about 5 miles cross-country to get to Tarnapol school.  He told the family one time that when he was 12, he was sent by his dad and brothers to Crystal Springs to the blacksmith to get some plowshares sharpened.  It took him the whole day to travel by horse the 7 miles there and back.  It was a different life that shaped his personality into the man we knew.  There were so many stories about his childhood, that we had the pleasure of hearing.

After schooling, he decided to take a mechanics course by correspondence, he then travelled to Edmonton to complete the practical part of the course.  He was very proud of this accomplishment.

Paul and Aline had a very unique way of communicating with each other when they were courting since neither had a phone.  Both their houses were located on hills and they had a prearranged time of day to send a message to each other.  Paul had a big mirror  (Baba always wanted to know where he was going with the mirror).  He stood on the front steps and Aline shone  a lantern from an upstairs window.  They would signal each other whether or not they would be going into town. Hence, the inscription on their headstone. Mirror Shines ~ Lantern Glows Forever. It obviously worked because Paul married Aline Simonot in 1949.  They purchased their beloved farm where they raised 5 children during some hard times. He worked at various dealerships and garages while running a mixed farm operation – he was a very busy, hardworking man.

Finally, he decided to open his own shop on the farm so he wouldn’t be away from his family so much.  Family meant everything to him. So, he farmed and did shop work in the yard.  We can remember the times when the yard would be full of farm equipment waiting to have repairs done with some very anxious farmers just waiting their turn.  He would never hesitate to put his own farming on hold while he went to someone’s field to get their equipment rolling again.  He was generous with his time and energy to the very end.  In later years, he would repair lawnmowers for people who would just drop them off in the yard.  He would fix it and wait for them to come back.  Then he would know who it belonged to. He could never resist trying to solve any mechanical problem, it presented a challenge and we always knew that we could phone him up and he would be able to diagnose and recommend a solution just by hearing a motor run or listening to a description.

Paul and Aline raised their family with the same values that guided their lives: honesty, integrity, kindness, respect, belief in God, loyalty, a strong work ethic, independence, and an appreciation for the acquisition of knowledge and skills. We consider ourselves very fortunate to have had his unconditional love for so long.

Gidu was always available for wise advice. He was very patient and would take the time to explain how something worked; the theory behind it ,so a person could understand what was going on.  He was always teaching skills like the correct technique to hand sharpen a handsaw; stressing how precise you had to be or letting his grandchildren drive the truck or tractor at a very young age while he supervised.  He wasn’t finished learning, himself. Just last year, he read a book on the “Laws of Thermodynamics”  so he could explain things better.  It was important to him that you knew how or why you did things, not just doing it without understanding. When he went on a road trip around the Tway area, he would point out how things were in the past or who lived where. Being able to check crops, see calves in the spring, or visit his other quarter put a little spring in his step.   He took the time to share his knowledge and has shown everyone how to chop wood, make kindling, the correct technique to fell a tree, do maintenance on a vehicle, drive a tractor, basic mechanics and so much more.

He was very welcoming and enjoyed meeting new people, young and old.  Gidu especially enjoyed visits from and hearing about his grandchildren and great grandchildren, nieces and nephews and their families.    He was always interested in what they were doing, their successes, and accomplishments.  He remembered what they all were doing and always asked about them if he hadn’t seen them in a while. Watching videos or seeing photos of their activities made him so proud. His refrigerator is covered with snapshots of all the young people in his life so he could see them every day.

Gidu was very mechanically inclined.  In his world, things weren’t tossed out when they broke down, they were fixed.  And if he didn’t have the parts or the tools to repair something, he would manufacture his own parts and tools. Grandmere used to help him in the shop grinding valves or helping him make parts for machinery when parts weren’t readily available. He took pride in quality work.  That unique blend of oil, grease, metal in his shop immediately evokes memories of Gidu, no matter where you encounter it.

After all the kids left home, Aline and Paul would go everywhere together, picking berries and mushrooms at their favorite spots, farming, gardening, star gazing, and shop work, of course.  Gidu took his marriage vows seriously and he took excellent care of Grandmere for many years at home, when she developed Alzheimer’s.

Gidu and Grandmere became good friends with Thelma Pepper, a renowned Saskatchewan photographer after she was introduced to them by Stella Loeffler.  She featured their photographs in her book “Spaces of Belonging” in 1996 as well as in exhibitions. Gidu always joked that he had been to Helsinki, one of the places where their photos were shown. Currently, Thelma’s exhibition at The Remai in Saskatoon features the photos she took. Up until 2020, Thelma and Stella would drive out every summer for a visit to reminisce and sample some of his homemade pickles. Gidu treasured those visits very much.

After Aline passed in May, 2000, Paul focused his energies on farming and gardening.  Gidu faithfully took care of Grandmere’s roses, picked and dried the petals which he would share with any who visited him.   He also became quite the master gardener. Always putting in far too much because he said someone might need extra vegetables. He was also a master pickle maker.  Everyone who visited him expected to be served dill pickles when they visited; they just had the right amount of crispness and flavour. This, along with a slice of his homemade bread just set the tone.  I believe he has passed on his secret recipe so the tradition of ‘Paul’s Pickles” and beets will be carried forward.

Gidu never really retired, never really stopped working, always finding something to do.  His kitchen table often became his shop work table especially during the winters.  You never knew what tools he would have on hand or what interesting thing he would be working on.  Gidu was very up to date on the news and current events, often shaking his head at some of the shenanigans going on.  He also remained quite fit for his age but we had to strongly suggest that he stay off the roof after he turned 90. However, that didn’t stop him from standing in the bucket of the front-end loader to trim trees that were a problem, or fix a barn door.  He was very independent and wanted to manage on his own, which he did for the most part.  He always looked forward to fall when he could arrange an expedition to his other quarter to cut trees and replenish his woodpile. He was also an expert at this; he could drop a tree precisely where he told you he was going to drop it.  He showed many of us the proper technique to fell a tree and saw it into lengths. He would chuckle at our unease as he prepared to chop down a tree.

He kept his lighthearted sense of humour and with his keen mind, you never knew if he was pulling your leg or not. Often, the twinkle in his eye, the innocent look on his face and the sly little grin prepared you for something.  Gidu always tried to stay positive and minimize his aches and pains, he didn’t want to worry anyone.  One of his favorite sayings was” if you’re happy, I am happy, so please be happy and smile”.

There are many people over the last few years, besides his family members, who helped make it possible for Gidu to live on the farm he loved so much for so long. He truly appreciated the visits from everyone.

In closing, I have to give you some of the background of the song we are going to share with you by Toby Keith.  Toby Keith was out golfing with Clint Eastwood who was 88 years old and he asked Clint how he still managed to act, film, produce and still play golf at his age.  Clint replied “ I get up every morning, go out the door, don’t let the old man in”

We thought this song describes our Gidu perfectly.  He just never ”let the old man in”.

To send flowers to the family or plant a tree in memory of Paul Kowalchuk, please visit Tribute Store
Friday
6
August