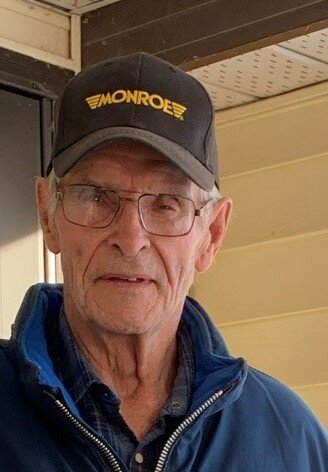 It is with sadness, the family of Neil Muirhead announces his passing on December 18, 2021, at the Shellbrook Hospital.

Neil was born in Shellbrook on November 17, 1933, to Bill and Kate Muirhead. He was the oldest of three children and grew up on the farm in the Wildrose District. Neil and his brother Allen, rode horseback to a one-room school until his parents bought the farm at Shellbrook so the boys could attend high school. He continued to be active in the Wildrose 4-H club and later became a leader when his daughter and son were members.

Neil became an accomplished athlete in Shellbrook. He held the provincial junior and senior discus record for many years. The Canadian Olympic team even sent him a discus and asked him to try out for the Olympics. He loved baseball and played third base for the Prince Albert Bohemian Junior Baseball team. His quick reflexes, strong arm, and heavy-hitting caught the attention of several major league scouts, however, his commitment to the farm kept him at home. He continued to play ball in Holbein and later in the Sturgeon Valley in local leagues.

After graduation, Neil attended the School of Agriculture in Saskatoon. The highlight of this time was when he and Allen were on the Saskatchewan Livestock Judging team at the Toronto Royal and they won gold watches in the competition.

In 1956, Neil married his childhood sweetheart, Betty Mortensen. Neil and Betty lived in a tiny cabin on the farm in Shellbrook. They became parents to a daughter and son while in Shellbrook and later moved the Wildrose farm. Although Neil was a grain farmer, his true interest was in cattle. He took pride in the Shorthorns he raised with his dad and brother.

Neil showed and sold bulls at sales around the province. He took the family on ‘the show circuit’ and traveled with the ‘Show String’. Summers were spent tenting at many of the provincial summer fairs. The success the family had with ‘Shellrose Shorthorns’ gave Neil the opportunity to judge Shorthorn shows at the Toronto Royal and the Centennial Show at the Calgary Stampede.

Neil was a humble man who enjoyed the simple things in life. Neil and Betty loved to dance and enjoyed attending the local Dine and Dances at the surrounding communities. Neil loved winter. He was an avid curler and loved hockey. He followed and coached some of the locals including the Shellbrook Elks for a time.

Neil and Betty spent their retirement following their grandsons’ sporting events and 4-H shows. Neil became the official pasture checker for the farm. He loved to drive around to all the pastures in the countryside to make sure all the fences were up, the cows and calves where they should be, and just admire the great job his son and grandson were doing with the herd.

Neil’s love of sports continued throughout his life. He followed his grandsons, nephews, and nieces throughout their sporting years, and was a known figure at the rink in the winter and the ball diamonds in the summer as he followed all the local athletes in their ventures.

There will be a small private service to honor Neil's request.  Family and friends wishing to send online condolences may visit www.beaulacfuneralhome.com.

Arrangements have been entrusted to the care of Beau “Lac” Funeral Home and Crematorium, Lynn Anderson Funeral Director, Shellbrook, SK 306-747-2828.