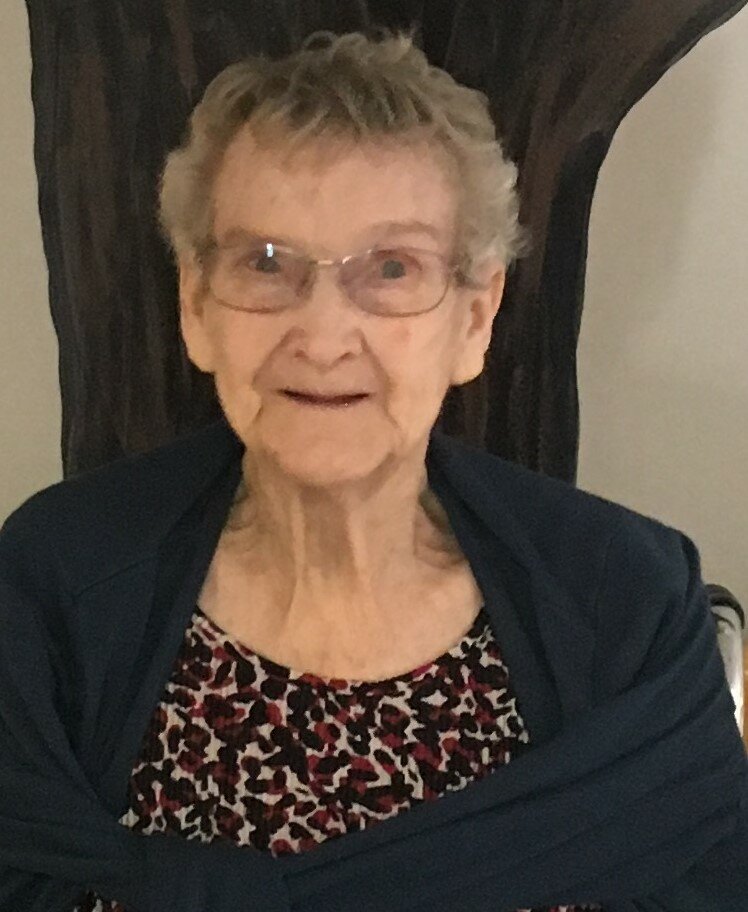 Marian was born on April 2nd, 1937, in New Osgoode, Saskatchewan. She was the second daughter of George and Myrna Penill. Marian grew up with her family in New Osgoode and spent her time going to school, helping with chores, and spending time with family and friends. She enjoyed track meets, county fairs, and trips into town for ice cream. In 1957 she married Alex Campbell. In 1958, Sandra was born, and their family began. They moved to Bremen where Alex was working with the railroad. Bill was born in 1959. Irene was born in 1961. They moved a few places before settling in Canwood in 1962. Alex and Marian owned a few different businesses including a jewelry store and a furnace cleaning and repair company. Doris was born in 1962, and Diana in 1963. Mary was born in 1967, and Bev in 1974. Alex passed away in 1980. Marian stayed on the farm for several years, raising chickens, and enjoying her large garden. In 1984, Marian moved into town. She became very busy with cleaning the church, babysitting for many different families, and became an active member in many different volunteer groups. Over the years, she helped out with just about every church, and organization she could find, whether she belonged to it or just helped when they needed it. She enjoyed cleaning at both the hall and the church, especially for weddings and events. In her spare time, she enjoyed visiting with family and friends, and would never turn down a chance to play a game of cards. She was active in volunteering at Whispering Pine Place and was one of the first auxiliary members. She enjoyed many bus trips with the senior’s group and enjoyed taking care of the mini-golf for many years. At home, she was busy reading, sewing, knitting, doing jigsaw puzzles, and all sorts of word puzzles. She collected pins and teapots and loved to show off her collections. She also enjoyed long phone conversations with family and friends in between their visits. She was an avid Saskatchewan Roughrider fan, so we all learned not to call during game time. In 2013, Marian moved into the Golden Acres. Although her home was much smaller, she still enjoyed having family and friends over, and her door was always open for company. If you could catch her at home that is. In 2020, she made her final move into Whispering Pine Place. She kept busy with puzzles, knitting, and attending activities, her favorite being bingo. She was always happy to tell everyone when she won a quarter or chocolate bar. She took up colouring and blessed many of us with her pictures. She kept her sense of humour and enjoyed teasing and joking with the staff. When visits became harder, she learned to FaceTime with the iPad, as well as watching for us to come visit at the window. Marian was always the first to help out anyone in need and instilled that virtue in her kids and grandkids. From volunteering to donating or any possible way of taking care of people or her community, she was always involved in some way.

Friends and family wishing to send online condolences may visit www.beaulacfuneralhome.com.  Arrangements have been entrusted to the care of Beau “Lac” Funeral Home and Crematorium, Lynn Anderson, Funeral Director, Shellbrook, 306-747-2828.

Share Your Memory of
Marian
Upload Your Memory View All Memories
Be the first to upload a memory!
Share A Memory