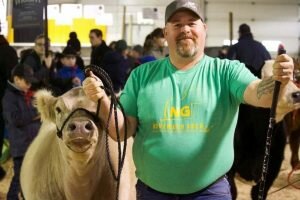 It is with great sadness and broken hearts that we announce the tragic and sudden passing of Dean Horn “Wet Willy” of Saskatoon, SK, on January 26, 2022 in Spiritwood at the age of 47. Dean was born in Spiritwood on November 15, 1974.

Dean leaves to cherish his memory his wife Denise and her daughters Nikki, Amber and Miranda; his parents, Joe and Isabelle Horn; his mother-in-law, Gale Wourms; his sister and brothers-in-law, Shelley (Don) Scott, Bayne (Gloria) Wourms, Tracey (Kim) Beblow, Chad (Lisa) Wourms and Amy (Darwin) Nicholls; as well as numerous nieces, nephews, aunts, uncles, cousins and friends. He was raised on the family farm near Mildred, where he was involved in 4H. He graduated from Spiritwood High School in 1994, and then attended Lakeland College in Vermillion to study Livestock Production. He finally found his true love in August 2012 when he met his wife Denise at the local rodeo where he was doing his best “clowning around”. It was love at first sight for Dean and he was never giving up. He worked hard to convince Denise they were meant to be. He won her over and they were married in July 2015. He always found a way to work with cattle. He was a huge member in the cattle family and within the different stockyards around the province. He also continued to be an active member of 4H throughout his adult life as a leader, judge and mentor as it was his true passion. He also loved sports with softball and slow pitch being his favorite to play.  No matter what Dean was involved in he gave it his all. He made everyone laugh until they cried and cared for everyone he met. There will be a graveside service at the Mildred South Cemetery in the spring or summer.

Family and friends wishing to send online condolences or share memories of Dean are welcome to visit www.beaulacfuneralhome.com. Arrangements have been entrusted to the care of Beau “Lac” Funeral Home and Crematorium, Delores Beaulac, Funeral Director, Spiritwood, SK, (306) 883-3500.

Share Your Memory of
Dean
Upload Your Memory View All Memories
Be the first to upload a memory!
Share A Memory