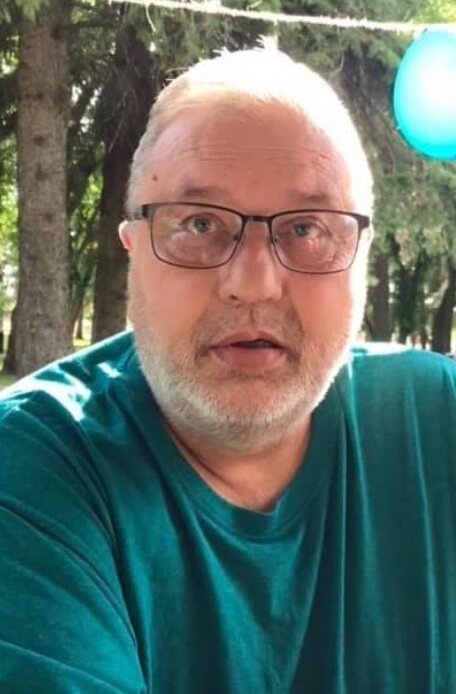 It is with sadness that we announce that Ron passed away peacefully in his sleep on February 6, 2022, at the age of 60 years old. He was born January 11, 1962, in Rosthern, Saskatchewan to Adrien and Doreen Doucette. He lived in Duck Lake at a young age and eventually moved to Prince Albert until he left at 18 to join the military.   Ron lived in a number of places over his lifetime including Ontario, Calgary, Vancouver, and Vancouver Island before settling in Prince Albert about 10 years ago. Vancouver and Vancouver Island were his favorite places and every winter he complained of how cold Saskatchewan was compared to there.

Ron was the oldest of five siblings and was probably the most mischievous one of all of us.  He would do or say anything to get a rise out of people and sit back giggling.  As he aged, he became somewhat ornery and owned that. He enjoyed spending time with his nieces and his great-nephews and looked forward to all the trouble they could get into. We all know he was a big teddy bear underneath and cared deeply about those close to him.

Even though Ron was mischievous he loved his books and reading, taking courses when he can and always wanting to learn something new. His last job before his health declined was supporting youth as a youth worker. He took pride in his job and supporting those in need.

Ron is survived by his four siblings:  Russell (Maureen); Daniel; Kevin (Teresa) and Nicole (Joe). He will be missed by his nieces, nephews, great-nephews, aunts, uncles, cousins, friends, and all those that had the opportunity to meet him. We would like to thank his close friends for supporting him over the years especially Glenn and Darcy. We also want to thank his physician, Dr. Hammond, and the staff at Green Hill Lodge and Suites for making his last few months comfortable and safe as well as his Home Care team.

Ron is predeceased by his parents, Adrien and Doreen Doucette; his grandparents, May and John Clark and Ernest and Marguerite Doucette.

In keeping with Ron’s wishes, a service will not be held, but we ask everyone to take a moment and reflect on a positive experience you had of him, especially those mischievous memories.

Share Your Memory of
Ronald
Upload Your Memory View All Memories
Be the first to upload a memory!
Share A Memory