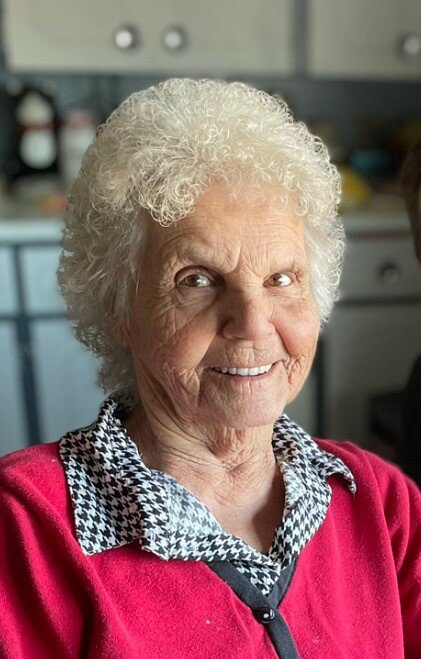 Bernice Crawford, 83, of Mont Nebo, Saskatchewan passed away peacefully on March 13, 2022, surrounded by her family.  Bernice was born to Charles and Mary Unyi, on August 2, 1938.  She was the eldest of 4 siblings raised on a homestead northwest of Leask, Saskatchewan.  She attended school in the Leask area.  She married Donald Crawford on December 18, 1959, and were married for 53 years until his passing in 2012.  They raised seven children, 4 daughters and 3 sons on their homestead in Mont Nebo, Saskatchewan.

Bernice loved to be surrounded by people and spend her time gardening.  Summer found her shoulder-deep in her raspberry patch, tending to 30-pound cabbage plants, and a truck box full of potatoes.  When she wasn’t in the garden, you could find Bernice in the farmhouse baking and cooking for her children, grandchildren, and anyone else that showed up.  Bernice was known for her homemade bread, buns, poppyseed roll, retes, raised donuts, Hungarian desserts to name a few.  Everyone had a seat at the table.  Over a lifetime, Bernice perfected the art of preserving fruits, vegetables, and fish.  She was known for her jellies, and syrups that were harvested from the land.

When the snow covered the ground, Bernice kept busy at her sewing machine, with her knitting needles, paintbrush, hammer, or crochet hook.  Every piece she created, whether it was a quilt, slippers, mitts, or yard ornament, came from the heart.

In lieu of flowers, memorial donations in Bernice’s memory may be directed to the Shellbrook and District Health Services Foundation, Box 33 Shellbrook SK. S0J 2E0 or Canadian Cancer Society.

Funeral Service for Bernice will be held on Friday, March 25, 2022, at 10:30 AM at St. Andrew’s Anglican Church, Shellbrook followed by lunch at the Shellbrook Pentacostal Assembly followed by a private family interment.

To send flowers to the family or plant a tree in memory of Bernice Crawford, please visit Tribute Store
Friday
25
March