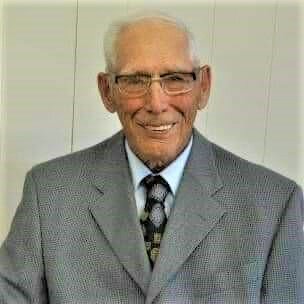 It is with the greatest appreciation for a long life that we announce his passing at Wheatland Lodge in Leask with family at his side.

Leo's education was cut short because the family farm needed the extra manpower. He never did learn how to read and write, but that never stopped him from becoming an exceptional farmer. He was well known far and wide. In later years he loved going to auction sales to find a good bargain, but his favorite part was visiting with the people he saw there. He worked hard all of his life to make the farm successful, even when he was living in Wheatland Lodge he was still working hard in his mind.

He married Florence McCarron in 1946. They lived on the Joanette family farm all of their lives. They celebrated 75 years of marriage last October.

Leo had a very loving heart and was loved by everyone. He loved when family came to visit the farm in the summer. He loved talking politics and religion to anyone who would engage, he would find out their beliefs, then he would argue for the other side whether it was his belief or not just for argument sake, I think he should have been a politician. He was always joking around, every woman he saw was one of his girlfriends. One of his favorite things to do all of his life was playing Kaiser. There were many games played between Leo and his brothers. They took it so seriously, some of the games went all night into the next day. They were served lunch and coffee during these games. In 2010, Leo received the Century Family Farm Award for the Joanette farm.

He is lovingly remembered by: His wife: Florence Joanette (McCarron).

His sister-in-law: Hazel Carter; his brother-in-law: Fred Ross Grandson and Bill Dodge; as well as numerous nieces and nephews.

A Celebration of Life will be held at a later date when we can celebrate Leo and Florence together.

Memorial donations can be made in honor of Leo Joanette to either St. Joseph's Parish in Marcelin, or Wheatland Lodge Foundation in Leask.

Share Your Memory of
Leo
Upload Your Memory View All Memories
Be the first to upload a memory!
Share A Memory