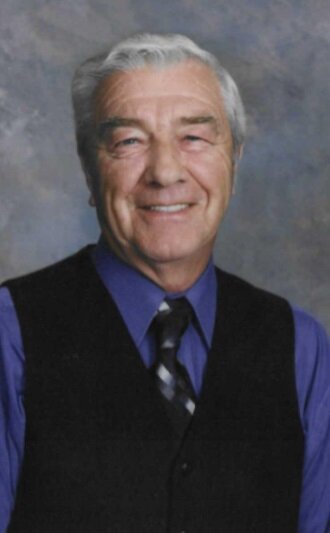 It is with great sadness that we announce the sudden passing of Raymond (Ray) Bernard Lamontagne at age 74 on Tuesday, March 15, 2022, on the family farm in the D’Amour District west of Leask, SK.  Ray was born on December 25, 1947, the youngest of eight children of Claire (Archambault) and Leo Lamontagne.  He was raised on the farm in the D’Amour District where he attended Beausite School.  He also attended Leask School before joining his father in working full time on the family farm.  For a brief period in 1968, he worked for a cartage business in Edmonton, and in 1969 he married Myrna Burrows.  They were blessed with three children:  Renee Lynn, Dion Shelton, and Steven Christopher who were all raised on the family farm—an experience they would not trade for the world. As a dad, Ray instilled a strong work ethic through his example and indulged and supported Renee’s obsession with horses and the boys’ obsessions with anything horse-powered.  The tragic passing of his son, Steve on February 6, 1994, was a loss Ray would face with his characteristic calm and strength.

On April 14, 1998, Ray married Julia Yakubchuk (Sander), a teacher from Prince Albert.  Ray greatly valued family roots and connection to the land. Together with Julia, he continued his stewardship of the land in the place he loved and where he was most happy.  Raymond also found his next favorite place on earth on the island of Kauai where he and Julia holidayed in the winter for more than a decade.   There he would exchange his usual farmer and Western gear for shades and Hawaiian print shirts and he would fully embrace the “Spirit of Aloha”.

To his friends and neighbors, Ray was the “Go-To Guy” and as such he will be terribly missed as will be his gifts for listening, his storytelling, his strong but gentle spirit, his sense of humor, and his sensible real- life advice.  He was a creative and resourceful craftsman in all regards and a patient teacher and mentor to anyone who showed interest.  His skills in mechanics, welding, machining, and woodworking were no less than amazing. He could literally build anything you wanted.   If parts were unavailable for a project, he would create them. He could look at a prototype of an object or device and recreate a new and better version. Most important, however, was his selfless giving spirit, always willing to help anyone who came to his shop or telephoned at any hour. He donated his time and expertise to community projects including building the altar for St Henry Church and being the “sound man” in support of Julia and the Music Ministry.   He did many commissioned projects and contributed to the building of numerous family homes over the years.  He also ventured into logging in the 1990s and later he enjoyed his work for Claude Robin at Done Rite Here Homes.

Ray loved family and as the youngest brother and the keeper of their family home, he enjoyed special relationships with his siblings and nieces and nephews.  Visits to Uncle Ray’s farm were always an adventure as he loved cars and vehicles in general and was always ready to go for a drive to explore the countryside.  He also so loved nature and God’s creatures.  It was not uncommon for Ray to come to the house with a tiny kitten tucked inside his overalls, often the one he felt was most vulnerable and in need of his warmth and protection.  Those traits were also found in his relationships.  He was a gentleman and a loving and devoted husband.   He loved watching things grow and he shared this passion with Julia creating and tending bountiful vegetable gardens and beautiful flower gardens and planters.  They also shared a love for music and Ray so enjoyed going to concerts and live performances, especially of Country music artists and Hawaiian slack key guitar

Ray was a wonderful father, but where he shone the brightest was as a grandfather.  He had a way with children, especially his grandkids.  So many fond memories stem from time spent with Grandpa on the farm.  He would spend countless hours playing, exploring, mentoring, and passing on his knowledge and skills all the while entertaining the whims of his grandkids.  His patience was limitless, and no matter what they wanted to do he was willing to do it— including playing Barbies.   He had a great sense of humor, quick wit and loved to tease.  Not much got past him.

At the core of Ray’s character was a solid willingness to serve others.  He worked hard and faced the challenges of life with calm acceptance and strength, drawn from his connection to the land and his belief in a loving God.  He was loved and respected by family, friends, and community and will be greatly missed by all who had the privilege to share the gift of his life—especially Julia, his forever love.

Those family and friends that are not able to attend Raymond's service, may view it following the link  https://youtu.be/fiazjSmNysE

To send flowers to the family or plant a tree in memory of Raymond Lamontagne, please visit Tribute Store
Thursday
24
March