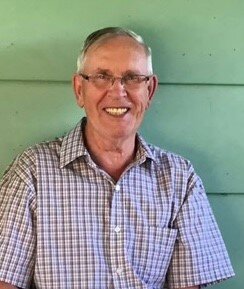 Please share a memory of Glen to include in a keepsake book for family and friends.
View Tribute Book

Glen was born at the Red Cross Outpost Hospital west of Paddockwood Sask. Glen was # 11 of 12 children in his family, as well as the youngest boy.

The Rayner family, including Glen lived in Paddockwood, Morse and Moose Jaw.  After graduating Grade 8 in Moose Jaw, he moved back to Paddockwood where he lived with his sister Emily & her husband, Sam right across the road from the Robertshaw farm which is where he would meet the love of his life, Grace.

Glen had several jobs when he was young which included hauling ice at Waskesiu and milling grain.

After Glen and Grace were married in 1963, they lived in Prince Albert for a short time and that is where John was born.  Glen and Grace then moved to Halbright where Glen went to work on an oilrig.   In June of 1964, Terry was born in Weyburn.  A couple of years later they moved to Davidson and then eventually to the Robertshaw farmyard near Paddockwood to live in their mobile home with their 2 sons.  They then moved to the Redwing Trailer Court to be closer to Prince Albert.

Glen worked hard to complete his GED and then in 1967 got a position as a Guard at the Penitentiary in Prince Albert.  He was with Corrections Canada for a total of 29 1/2 years.

After moving to the trailer court, in 1967, they had a brand-new son when Gordon was born.  The next step for Glen and Grace was the purchase of their first home in Prince Albert.  5 years later in 1972, their family was completed with the adoption of a little girl named Laurie-Ann.

As the family was growing up Glen was very busy with his family and loved to go fishing and camping when ever they could.  He was also very active in Boy Scouts, as a leader with the boys and they had many trips and adventures with the Boy Scouts.

Glen was also very avid horseshoe player and was involved in the Prince Albert Horseshoe club.

In 1978, Glen took a transfer to work at the new RPC in Saskatoon.  He used his time on the night shifts to work on his fret work projects, which he made and sold at craft sales and gifted many priceless items to friends and family.  After moving to Saskatoon, Glen and the boys were still very active in Boy Scouts and attended many camps and some large Jamborees in Alberta.

Glen and the family still did lots of camping and after Glen retired, they went on many trips with their Boler trailer in tow.  They ended up going to Little Bear Lake where they fell in love with the campground and people they had met.  Glen worked for the campground and eventually Glen and Grace took over the campground for several years.  It was hard work, but they loved meeting all the campers that came every year and the seasonal campers were like a second family.

Glen and Grace moved to Choiceland so they could be closer to the campground and to get away from the hustle and bustle of Saskatoon.  Glen tried curling for fun and found a new passion of 5 pin Bowling, playing in leagues in Nipawin and Prince Albert.

After many years of having the campground, they decided to give it up but kept their sought-after seasonal site in the campground.  They decided they wanted to do more travelling and see more new places.  This was when they went on probably their biggest and best adventure, which was to travel to Alaska with their truck and trailer.  They met and travelled with many different people and enjoyed all they saw and did along the way there and back.

Glen also stated playing horseshoes again and was playing in tournaments throughout the summer months and qualified for Nationals in Toronto, Calgary, and Saskatoon.

As time went on Glen and Grace decided to move back to Prince Albert to a house that Mom could navigate better, with less stairs and to be closer to friends and family and to cut down on all the highway travel that they had been doing.

Once back in Prince Albert, Glen continued playing bowling and horseshoes.  They still liked to go fishing and to the camper at the lake, until they decided it was time to sell it, as it was getting harder for them make the trips and keep up with the maintenance of their site.

In 2018 after a brief hospital stay, the love of Glen’s life, Grace passed away suddenly.  Glen was devastated by this loss and during the next few months his Dementia worsened, and he eventually ended up at the Mennonite Nursing Home in Rosthern.  Over time as the disease took over his body and mind, he and it slowly changed him and took away the wonderful man that we all knew and loved.   On July 26th, 2022, he took his final breath, and he was called to be by Grace’s side once again, where he belonged.

We would like to thank the Mennonite Care Home in Rosthern for their wonderful care of Dad when he was there.  The staff were very caring and compassionate and made it feel like home for Dad. I am sure they all talked to Dad about fishing, even if they did not ever go, as they knew it was one of his life long passions. They also knew that he was always up for a good bowl of ice-cream or a chocolate bar when they were having snacks, he would never say no to either of those treats.

Thank you to Beau “Lac” Funeral Home and Tracy-Lynn Lenchuk for their compassionate and professional help during this very difficult time.

A Celebration of Glen’s Life will be held at 1:00 p.m., on Saturday, September 10, 2022, at Plaza 88, 888 Central Avenue, Prince Albert, SK.  A recording of the service may be viewed at  https://jonlao.xyz/glen-rayner/ In lieu of other tributes, donations in memory of Glen may be made to the Alzheimer Society of Saskatchewan, 301-2550-12th Avenue, Regina, SK, S4P 3X1.  Family and friends wishing to send online condolences are welcome to visit www.beaulacfuneralhome.com.  Arrangements have been entrusted to the care of Beau “Lac” Funeral Home and Crematorium, Tracy-Lynn Lenchuk, Funeral Director, Prince Albert, SK 306-763-3322.

To send flowers to the family or plant a tree in memory of Glen Rayner, please visit Tribute Store
Saturday
10
September

Look inside to read what others have shared
Family and friends are coming together online to create a special keepsake. Every memory left on the online obituary will be automatically included in this book.
View Tribute Book
Share Your Memory of
Glen
Upload Your Memory View All Memories
Be the first to upload a memory!
Share A Memory
Send Flowers