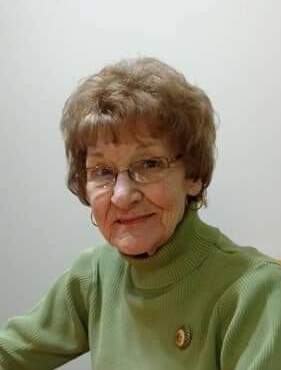 It is with much sadness that we announce the passing of Frances Catherine Lutz (nee Vorachek), also known to many as simply “Fran” on August 14, 2022 at the age of 86 years at the Spiritwood Long Term Care Home.

Fran was the oldest of 3 children born in Hafford, Sask. to Ben and Catherine Vorachek on Nov. 25, 1935 and was raised on her parents farm in Leask, Sask. along with her sister Maureen and her brother Joe.  She received her education at the Leask and Bramshott Schools as well as the Convent in North Battleford.

After finishing school Fran took a job in Leask at the Royal Bank.  It was shortly after this that Fran met Johnny Garand and in 1954 they were married.  Fran loved to dance and she spent many Saturday nights at her sister Maureen and Peter's farm at Iroquois Lake enjoying the barn dances that were held there quite regularly.  She really enjoyed spending time out at Iroquois Lake.

Fran's adult years consisted of working at a few different jobs.  Other than the Royal Bank, she worked at a Nursing Home and then a few jobs in retail.  But her most important job was staying at home and caring for her 4 boys.  She lived in a few places throughout her life which consisted of Leask, North Battleford, Prince Albert, Meadow Lake, Weldon, Iroquois Lake and Shell Lake.

Fran was just Fran.  She loved to stop in at the Casino from time to time to donate some money and every once in a while she would leave with a small winning.  She loved bingo and played weekly until her failing eyesight made it too difficult to play.  She was an avid Rider fan and cheered them on every time they played making sure she wore her lucky green Rider shirt.  She was also a curling fan through and through and would be found sitting in front of the T.V. cheering on her favorite team.  Even with her failing eyesight in the last few years she would still sit in front of her T.V.and just listen to the commentators play by play of the Rider and curling games because as she would always remind us, “You know I can't see”!

Fran was a wonderful cook, baker and a tremendous hostess.  She treated everyone with kindness and always made them feel like family.  Coffee and cake would always be served and if you came at meal time, you always left with a full belly.  She loved her boys as well as her daughters in law and adored her 6 grandchildren with everything she had.  She was proud of each and every one of their accomplishments and just loved to be able to spend time with them all because family meant the world to her.  Fran is definitely going to be missed by all who loved her.

A Graveside Service for family and friends will be held on Saturday, August 27, 2022 at 1 p.m. at the Shell Lake Cemetery in Shell Lake, Sask. with Delores Beaulac officiating.  In lieu of flowers donations may be made to the charity of your choice in memory of Frances Lutz as tokens of remembrance.  There will be a lunch after the service at the Royal Canadian Legion on Main Street in Shell Lake.

To send flowers to the family or plant a tree in memory of Frances Lutz, please visit Tribute Store
Saturday
27
August