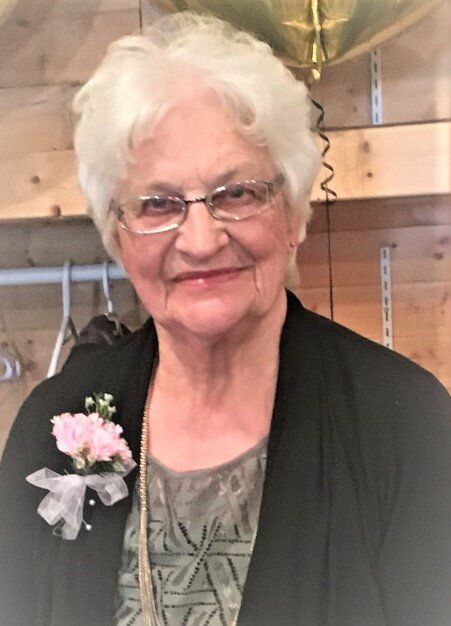 Lois Lorraine Odegaard (Skavlebo) was born on April 8th, 1937, at the Shellbrook nursing home to parents Mable & Henry Odegaard. Lois lived in the Ordale district her entire life. Her parents owned the Ordale Store and Lois grew up living and working at the store. Lois took her schooling at Bygland and Mistawasis. She had one younger brother and sister, Murray and Ilene, and an infant brother who passed away at birth.

Lois married Herman Skavlebo on January 10th, 1953 and they farmed and resided on the Skavlebo farm for the next 55 years until Herman’s passing in 2008. They had 8 children, 6 girls, and 2 boys. Marion, Valerie, Gordon, Shirley, Sheila, Kathy, Gail, and Stanley.

Lois was a farmer’s wife and she worked very hard having a huge garden, milked cows, raised chickens, and raised her 8 children.

In the early 70’s she went back to school and obtained her General Education Diploma all while she was raising 8 children and working on the farm. Lois then began working at the Shellbrook Union Hospital in the kitchen and then trained to become a health care aide and worked full time for 23 years at the hospital retiring in 1996.

Lois passed away on Monday, September 12th at the Parkland Integrated Health Centre Long Term Care in Shellbrook, SK. with her family by her side. She was 85 years of age.

She is predeceased by her husband Herman Skavlebo; her mother and step-father Mable and Arnold Adamson; her father Henry Odegaard; and her sister Ilene Derr; as well as a brother in infancy.

The Funeral Service for Lois will take place on Saturday, September 17, 2022 at 2:00 pm from St. John’s Lutheran Church, Shellbrook, Saskatchewan with Reverend Emmanuel Aristide as officiant.

In lieu, of tributes, memorial donations may be made in memory of Lois to the Concordia Congregation, c/o Stanley Skavlebo, Box 262, Shellbrook, Saskatchewan.

To send flowers to the family or plant a tree in memory of Lois Skavlebo, please visit Tribute Store
Saturday
17
September