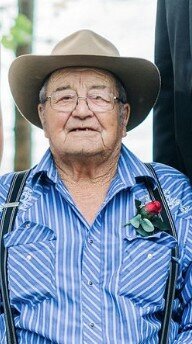 Please share a memory of Robert to include in a keepsake book for family and friends.
View Tribute Book

It is with heavy hearts that we announce the passing of our father, grandfather, and great grandfather Robert Gaudry.  He passed away at the age of 87 with all his children at his side.

Robert was born on September 18th, 1935, in Mattes. He was the second child to Beatrice and Janvier Gaudry. He grew up on the Gaudry homestead, working on the farm, raising, and breaking horses, and haying the park meadows. He raced chariots and competed in the rodeo events. When Robert was younger, he spent summers working as a ranch hand in Maple Creek. He was always fond of his time in Maple Creek and returned there many times bringing his family with him. He enjoyed the visits with old friends.

Robert married Kathy in 1961 at the Park Valley Church and in 1973 they bought The Farm, where they raised their family together. Although Robert was always busy working the farm, he always made time for his family. Robert spent countless hours following his six children, and later grand children and great grandchildren, to many sports games or tournaments. He also helped coach the teams. You could always count on the Gaudry’s to show up, even in a whiteout blizzard.

His grandchildren remember going to bible school in the summer and getting to spend time at the farm. If it was grandpa’s turn to pick them up after bible school, they knew they might be waiting, because he always seemed to get busy working with the ones who stayed back on the farm. The stories our kids have from their time spend at the farm with grandma and grandpa are endless.

We all share cherished memories of Robert. When you would visit him out on the farm, you would either find him sitting at the table looking out the window, with his cup full of coffee or a roll-your-own cigarette in his hand. You could also find him sitting in his chair in the living room with the TV blasting, way too loud, always having his phone and his trusty black phonebook at his side. People were always welcome to stop by for coffee.

At the Gaudry house the door was always open. Robert was often willing to give someone a chance or help them out if they were down on their luck. Because of this, he was able to make many friends throughout his life. Recently a new neighbour moved in and became friend of Roberts. Nathan was a close friend who visited daily and with his help Robert was able to spend more time at the farm.

Even after Robert sold the farm in 2021, and was living in town, he continued to travel to The Farm to cut the grass, plow the snow, feed the cats, and take care of the place. Matt has numerous trail camera pictures of Grandpa checking things out on the quad. Last winter with all the snow and storms, he still somehow managed to make his daily drive to the farm. Robert was always driving around and checking crops – even though they weren’t his.

Robert was a tough man and never gave up. He fought hard during his two battles with cancer, and we will forever treasure the time we spent with him. Those of us who could make it celebrated Robert’s 87th birthday on September 18th. He planned the party, and it felt like his way to say goodbye.

He was predeceased by his wife Kathy, his infant daughter, Alvena, his parents, Janvier and Beatrice Gaudry, his brother Wilfred, his sisters Cecile and Shirley.

In lieu of tributes, memorial donations may be made in memory of Robert to the Jim Pattison Children's Hospital Foundation.

Arrangements have been entrusted to the care of Beau “Lac” Funeral Home and Crematorium, Tammy Smart Funeral Director, Shellbrook, SK 306-747-2828.

To send flowers to the family or plant a tree in memory of Robert Gaudry, please visit Tribute Store
Monday
3
October

Look inside to read what others have shared
Family and friends are coming together online to create a special keepsake. Every memory left on the online obituary will be automatically included in this book.
View Tribute Book
Share Your Memory of
Robert
Upload Your Memory View All Memories
Be the first to upload a memory!
Share A Memory
Send Flowers