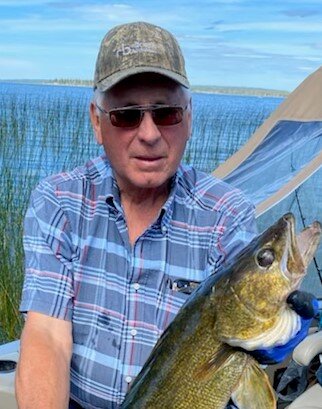 Please share a memory of Jesse to include in a keepsake book for family and friends.
View Tribute Book

It is with great sadness we announce the unexpected passing of our husband, father, grandfather, and great-grandfather.

Jesse spent his early years living in Saskatoon.  He moved to the Big River area when he was 14 years old.  Those first years were spent at the north end of Delaronde Lake trapping fur, commercial fishing and raising mink.  Jesse spent 29 years owning a logging contractor business in the Big River area called Del Lake Enterprises..  Throughout the years, many friendships were acquired.

Jesse was also a private pilot and avid fisherman who enjoyed all that a northern Saskatchewan bush pilot could want.  Retirement brought many flying fishing trips in Northern SK and boat trips in the summer and ice fishing in the bombardier in the winter.on Delaronde Lake and surrounding area.  Jesse also loved time spent at the family cabin.  He loved visiting, entertaining and time spent with family.

He lived a fast, lively, full, and busy life.  He filled the room with his presence and will be greatly missed by family and friends.

Jesse is lovingly remembered by:

jesse is lovingly remembered by:

His loving wife of 54 years: Simone

Numerous nieces, nephews, and other relatives.

His parents: Peter and Maria Klassen

One of his favourite quotes was:  “Don’t be sad it’s over, just be glad it happened.” By Dr. Seuss

There was  a Memorial Service held for Jesse on Saturday, October 29, 2022, at 2:00 p.m. from the Big River Community Hall with Pastor Jason Boucher officiating.

In lieu of tributes, memorial donations may be made in memory of Jesse to either The Salvation Army (38 Bateman Crescent, Saskatoon, SK S7H 3C4) or to the Big River Christmas Organization (Box 203 Big River, SK S0J 0E0).

To send flowers to the family or plant a tree in memory of Jesse Klassen, please visit Tribute Store
Saturday
29
October

Look inside to read what others have shared
Family and friends are coming together online to create a special keepsake. Every memory left on the online obituary will be automatically included in this book.
View Tribute Book
Share Your Memory of
Jesse
Upload Your Memory View All Memories
Be the first to upload a memory!
Share A Memory
Send Flowers