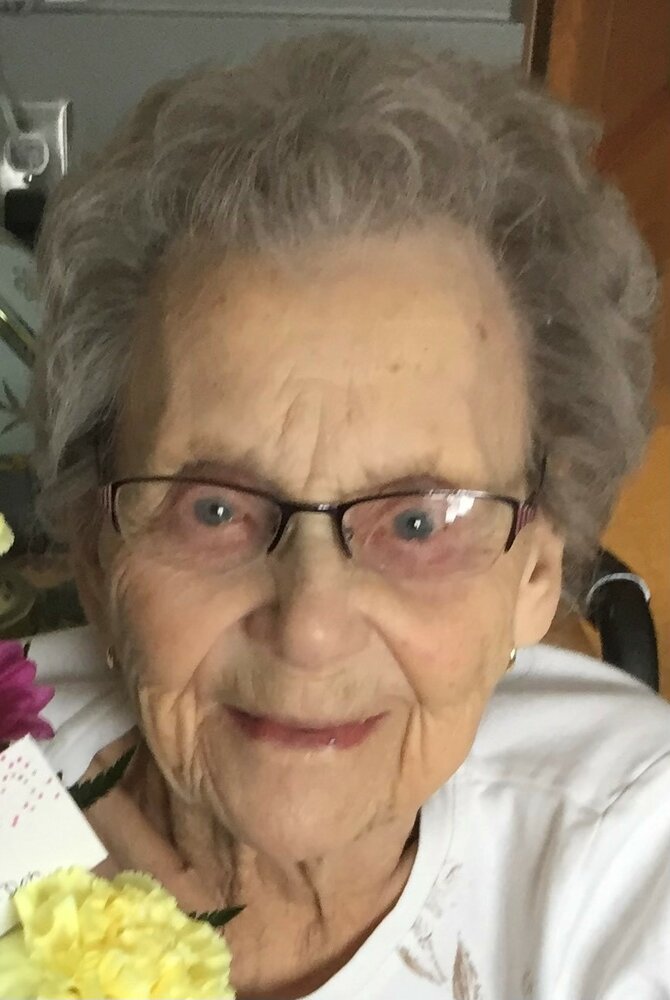 Please share a memory of Esther to include in a keepsake book for family and friends.
View Tribute Book

Esther Strate was born on February 27, 1924, to Axel and Jonette Haroldson. Esther passed away on November 22, 2022, at the age of 98 years. A memorial service was held on Saturday January 7, 2023, in the Shell Lake Lions Hall with Pastor Sarah Urano officiating. Music by Patty Heisler, readings by Pastor David Jensen, Urn bearer was Troy Stene and Eulogy was given by Esther’s grandchildren Sheila Marentette and Gavin Gunderson. A big thank you to Darcy and Janice Strate for the video presentation.
Left to cherish her memory her children: Sharon (Ken) Cameron; Nicole Cameron, Quinn (Mindy) Cameron, Ronald (Donna) Strate; Bonnie (Trevor) Mandziak, Angie (Claude) Denis, Scott (Amy), Carol (Albert) Francoeur; Sheila (Don) Marentette; Michelle Francoeur, Amy Johnson, Jocelyn (Trende) Stene; Troy (Candice); Dorin (Marcy); Bradley (ToniRae), Deborah
(Don Zwingli); Gavin (Kristy) Gunderson ; Ashley (Shane) Gerein, Darcy (Janice); Kyle (Jasmine); Lexi (Paul) McDonald, daughters in law: Elaine Strate; Dwayne (Denise); Lorne; Robert (Susan); Lisa Strate, Joyce Strate; Rodney (Kristan); Tracy (Lance) McLean, 45 great grandchildren and 6 great-great grandchildren.
Esther was born in 1924 on her family farmstead near Shell Lake. She was the only girl in a family of five children.
She attended Lonesome Pine School until Grade 10. For grade 11, she attended Shell Lake High School but because of how far away it was she lived in town in a granary without heat or power with her friend Ruth Vaagen. Esther was unable to attend grade 12 as the family had a bad crop year but her dream was to become a teacher, so she started to do her Grade 12
through correspondence. She said she won the lottery that year as there was a shortage of
teachers due to the war, so they were offering a teaching course for those who had completed grade 11 – she applied and was accepted.
Only a short five weeks after she started the course, she was hired to teach at Camp Lake School with 28 students in Grade 1 – 10.
Over the years Esther also taught Grades 1- 8 at Lonesome Pine School, Mont Nebo School and finally in1969 in Shell Lake School - where she taught Grade 1 until she retired in 1983 after 27 years of teaching. She was able to teach all of her children at school and even a few of her grandchildren were lucky enough to have Grade 1 with Mrs. Strate.

In 1948 on August 28 Esther married Garnett Strate and they moved to Grandpa’s farm and raised their family. Together they shared 8 children – Morris, Bob, Sharon, Ron, Carol, Jocelyn, Debbie and Darcy.
Esther often shared stories about living on the farm, getting power, their first TV, the experience of raising children, teaching school in one room, gardening and helping grandpa with farming,
tending to the cows, pigs, chickens and turkeys.  She was a busy woman who worked hard, but she always took time to sit down to play a game
of cards or cut some paper dolls to color. She was very resourceful; it seems there was nothing she couldn't make sewing clothes for children, grandchildren and great grandchildren, crafts, paper tole, ceramics, cross stitch and quilting. We have all been blessed with these precious
creations from her. Esther was a hostess and cook – on the farm there were always extra people at the table and often many would spend the night. She never batted an eye or complained, just went to work creating an amazing meal.
Esther and Garnett moved off the farm to the small acreage just outside of Shell Lake in 1974. Here they had way more free time and started to enjoy travelling and camping. They travelled both within Canada and internationally with family and friends.
When the care of the yard and home was becoming too much they then moved into the Villa in Shell Lake. Many of the great grandchildren will remember visiting great grandma and great grandpa, running through the halls at the Villa, meeting all the other people in the building.
Many of the grandchildren and great grandchildren were blessed with grandma babysitting – spending time playing cards and crafting as well as teaching them to drink coffee.
In late 1999 Grandpa’s health started to decline, and he needed to move into a care home. In July of 2000 She gave her last kiss to Garnett.
Esther continued to live in the Villa with support from her children for as long as she could. In 2018 after suffering a broken hip she settled into her new home in Parkland Integrated Health.
The family set the room with all her special things making it just like home for her. Even a fridge to hold those important snacks she loved to share.
Mom’s love was an unconditional kind that says, no matter how bad you mess up, I've got you.  If you were ever in a pinch, the person you would want in your corner would definitely be Mom, because she always had a solution.
Some things learned from or remember about Mom:
Don't wear your clothes out washing them.
Expiration dates are only a suggestion, it's probably still good.
Shut those lights off!!
Cut open or add water to shampoo, lotion, dish soap and toothpaste tubes so you didn't waste any.
She loved music, up until she left us she was able to play music. For years she played the mandolin. Recently Darcy brought her a piano and she would play to those who visited. You could count on hearing You are My Sunshine and Don’t Sit Under the Apple Tree when you visited.

Those wishing may make donations to the Scandia Cemetery in memory of Esther Strate as tokens of remembrance.

The family would like to extend a thank you Mark Muir and the Beau “Lac” Funeral Home & Crematorium for their kindness and help. Also, a very special thank you to the staff of Parkland Integrated Health Care for the kindness and love they gave mom in her last years!

To send flowers to the family or plant a tree in memory of Esther Strate, please visit Tribute Store
Saturday
7
January

Look inside to read what others have shared
Family and friends are coming together online to create a special keepsake. Every memory left on the online obituary will be automatically included in this book.
View Tribute Book
Share Your Memory of
Esther
Upload Your Memory View All Memories
Be the first to upload a memory!
Share A Memory
Send Flowers