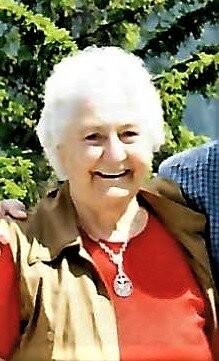 Please share a memory of Jenny to include in a keepsake book for family and friends.
View Tribute Book

Jenny was born to Natalia & Rudolf Sommerfeld, on November 4, 1930, in the Brightholme District, SK. She was the eldest of three. Jenny attended school at Mount Trivot. On October 28, 1950, she married Alfred Ottmere Grimm. They went on to farm west of Parkside, then moving to the Hilldrop district west of Shellbrook where she lived and helped on the farm till she moved to Shellbrook.

Jenny was predeceased by her parents, Natalia & Rudolf Sommerfeld; her husband Alfred Ottmere Grimm; her brothers, Raymond & Hugo; as well as one niece. Jenny is lovingly survived by her son, Garnet (Barbara) Grimm; her sisters-in-law, Marie & Cheryl; aswell as numerous nieces and nephews.

There will be a private family graveside Service held for Jenny.

In lieu of tributes, the family asks that you pay it forward, and do a kind deed for a friend or neighbor this holiday season in memory of Jenny.

Family and friends wishing to send online condolences are welcome to visit www.beaulacfuneralhome.com  Arrangements have been entrusted to the care of Beau “Lac” Funeral Home and Crematorium, Tammy Smart Funeral Director, Shellbrook, SK 306-747-2828.

Share Your Memory of
Jenny
Upload Your Memory View All Memories
Be the first to upload a memory!
Share A Memory