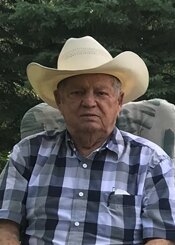 Please share a memory of George to include in a keepsake book for family and friends.
View Tribute Book

George William Bannerman, late of MacDowall, SK, passed away peacefully, surrounded by his family on Tuesday, January 10, 2023, at Good Shephard Villa in Prince Albert, SK. George is survived by his loving wife of 73 years, Darlene of Good Sheppard Villa; his son Robert (Lorette) Bannerman, Carrie and children, Dylan and Jessie; his daughter Diane (David) Sinclair, Todd (Darlene) and their children, Tori, Brody, Trey, and Teagan; Troy (Crystelle) Sinclair and their children, Mikayla, Blayse and Cole; Amy(Hugo) Watt and their children, Kara and Jack; nephews, Ron (Diane) Brown and family; Duane Brown and family.  George was predeceased by  his parents, Lawrence, and Mabel Bannerman; sister, Valerie (Vernon) Brown; nephew, Orvil Brown; parents-in-law, Jack, and Opal Shipway; brother-in-law, Larry Shipway.  The family would like to thank Pat and all the staff at Good Sheppard Villa for their exceptional care.

Funeral Service  will be held at MacDowall Lions Hall, January 19th, 2023, 1:00 p.m. In lieu of other tributes, donations in memory of George may be made to Lindsay Cemetery.  Family and friends wishing to send online condolences are welcome to visit www.beaulacfuneralhome.com.  Arrangements have been entrusted to the care of Beau “Lac” Funeral Home and Crematorium Marianne Turcotte, Funeral Director, Prince Albert, SK 306-763-3322.

To send flowers to the family or plant a tree in memory of George Bannerman, please visit Tribute Store
Thursday
19
January

Look inside to read what others have shared
Family and friends are coming together online to create a special keepsake. Every memory left on the online obituary will be automatically included in this book.
View Tribute Book
Share Your Memory of
George
Upload Your Memory View All Memories
Be the first to upload a memory!
Share A Memory
Send Flowers