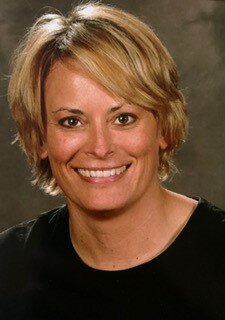 It is with heavy hearts that Keith, Hilda, and Ryan announce the sudden passing of their beautiful daughter and sister.  Lori Jane was born in Prince Albert on November 8, 1971 and passed away peacefully in her sleep November 18, 2021 in Calgary.  She died a natural death due to a heart attack.

Lori Jane’s love of life and living it to the fullest, combined with her independent spirit, self confidence and determination allowed her to accomplish much in her life as an athlete, coach, technical director, and business owner.

Lori Jane attended St. Mary High School and played all school sports (basketball, volleyball, badminton, cross country running, track and field, etc.) as well as soccer, ringette, and racquetball.  In Grade 12, she received the St. Mary High School Top Female Athlete Award. She exceled at soccer at the local and provincial level but made her mark on the racquetball court.  She started playing at age 11 and very quickly developed into a top provincial, national and international junior player.  In her early 20’s she qualified for the National Women’s Team and in 1995 she won her first of three National singles. In her 13 years on the National team, she won many national and international medals in Singles and Doubles.

While competing on the Canadian National Team, she earned a B.A. in Psychology and Masters degree in Kinesiology (majoring in Sports Psychology) from the University of Saskatchewan.  She also completed the Certified Fitness Consultant and the National Coaching Certification Programs, as well as a diploma in Mental Training.

In her late 20’s, she moved to Calgary and started a consulting business in which she provided personal fitness and mental training, as well as doing workshops and presentations to schools, businesses, and other community groups on topics such as self-esteem, physical fitness, goalsetting, motivation, etc.

In her 30’s she moved to San Diego, which allowed her to play more Pro Tour events and continue her work as Technical Director of Racquetball Canada.  San Diego was a place that she loved for the weather, beaches, scenery, culture, and the great friendships she developed.  She spent most of a decade in San Diego where she was a partner in a wellness centre. Unfortunately, this is where she contracted chronic Lyme disease, and she returned to Calgary for treatment.

The days of her physical activities and her extensive travel were now limited.  She had many painful days and life was difficult, but she continued to adapt to her new existence by never losing hope.  She continued to be optimistic, believed she would get better, and looked for tools to cope with her pain and promote healing.  Over the years, Lori Jane made many friends and helped many people.  When she got sick, she was very grateful for the friends who reached out to help and support her.  She loved and appreciated the beauty of nature and used her camera to capture some amazing pictures and videos.  She liked sunrises, sunsets, and pictures of the changing skies.  On her good days, she developed new hobbies/interests such as geocaching, and hiking adventures with her beloved dog, Rocket.

Lori was a very spiritual person in her own way.  She had a strong believe in the afterlife.  She was not afraid to die but was not ready, as she believed that she had unfinished work to complete on earth.  She was a very compassionate person and wanted to help herself and others heal.

This quote captures the essence of Lori’s life and work journey:

“Do not go where the path may lead, go instead where there is no path and leave a trail.”  (Ralph Waldo Emerson).

May she rest in peace.

Due to Covid restrictions, a Celebration of Life will be held at a later date.

Share Your Memory of
Lori
Upload Your Memory View All Memories
Be the first to upload a memory!
Share A Memory